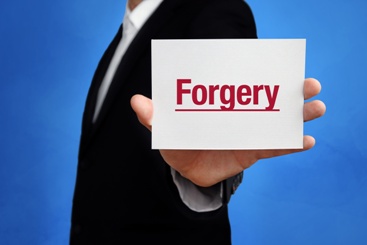 Forgery is the crime of making, altering, using, or possessing false writing in order to commit fraud. There are many types of forgery, from signing someone else’s name on an official document to falsifying a passport or driver’s license. If the forgery involves money or federal documents or is intended to defraud the federal government, then the crime will be charged by federal law enforcement officers.

Proving the Crime of Forgery

In order for the government to make its case for forgery, it will have to prove the following:

The document was legally significant.

Signing someone else’s name to a letter of complaint you send to an individual or business would not constitute forgery because the letter is not a legal document. However, government-issued documents such as passports, military discharge papers, immigration documents, and the like, would be considered legally significant.

The writing is “false.”

Creating a document to look like a standard legal document is an example of false writing, but so is materially altering a legitimate document. For example, deleting, adding, or changing portions of a document that results in a change to the legal rights or obligations represented in the document would be considered forgery.

The document was altered with the intent to defraud.

To be charged with fraud, the defendant must have intended to defraud the federal government with the document. A person who has unknowingly signed or received a forged document should not be charged because they did not intend to commit fraud with it.

A federal criminal defense attorney will examine these elements in order to build the best case for a defendant. The federal crime of forgery carries significant penalties, including up to 15 years in prison and steep fines, so it is important to launch an aggressive defense.