Charged With Healthcare Fraud in Miami? We Can Help! 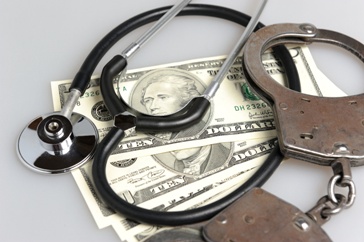 In 2019, the Justice Department obtained $2.6 billion in settlements and judgments from civil cases involving healthcare fraud. Many of these judgments were against corporations and organizations, including drug and medical device manufacturers, hospitals, pharmacies, hospice organizations, and laboratories, but thousands of individuals are also prosecuted on healthcare fraud charges every year. If you are a physician or patient facing federal healthcare fraud charges, you need an attorney who will defend your right to fair treatment and due process.

What Is Healthcare Fraud?

There is a range of laws that can be applied when it is suspected that someone defrauded a healthcare system. The federal prosecutor will decide which statutes apply to your case and will charge you with as many as possible. Possible fraud charges include:

This general statute prohibits someone from making a false representation or promise with an intent to defraud a healthcare program. The false representation must relate to something important, and the burden is on the prosecutor to prove that the defendant acted with intent. Conviction on this charge carries a maximum sentence of 10 years in federal prison.

If any form of mail service, telephone, or internet were used to commit fraud, you could also face this charge. Conviction on this charge could double your potential prison sentence to 20 years. The prosecutor would have to provide evidence that email, telephone calls, or paper mail was an integral part of the fraud.

A bribery charge could apply if a physician or clinic gets some form of unfair benefit or kickback. This will only be a federal charge if it involves a federal program such as Medicare, Medicaid, or Tricare. Either offering or accepting a kickback could land you in prison for up to five years.

Billing for services that were never provided or filing an insurance claim for services you did not receive could be charged under the false claims act. If the false billing involved a government program, it would be a federal charge and could result in a five-year prison sentence.

Any time you are questioned by federal authorities and don’t tell the truth, you can be charged with making false statements. This charge could be added on to another charge if they think they can get a conviction, or it could be the only charge you face. This is why it’s so important that you contact a lawyer before talking to federal agents. You could get yourself into deeper trouble by trying to get yourself out of trouble.

If you have been accused of any of these crimes, your first move should be to contact a federal criminal defense attorney.

Whether you are a patient who is accused of defrauding a doctor or an insurance company or a practitioner accused of fraud, the Izquierdo Law Firm will thoroughly investigate your case to come up with the best possible defense. The first thing we will do is look into how the feds got the evidence they are using against you. We will file a motion to suppress any evidence—including medical records, phone logs, computers, etc.—that was obtained through an illegal search or wiretap. We could also have medical experts and forensic accountants look over the evidence to dispute the prosecution’s claim that you committed fraud. We may present character witnesses to convince the jury that you are not a person who cheats. Each healthcare fraud case is unique, and we will devise the best strategy given your situation.