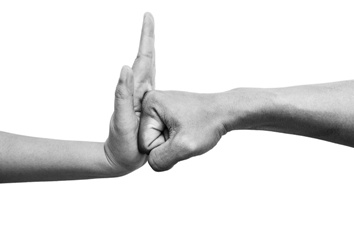 This argument may not have been any different from every other fight you and your partner have had, but this time the police were called. You might think it’s no big deal—just a misunderstanding that your partner will explain when it comes down to it. But this would be a big mistake. If you are accused of domestic violence and the police are involved, you need to talk to a Miami criminal defense attorney as soon as possible. Without an attorney, things could escalate quickly and, before you know it, you could be in jail.

Don’t get us wrong—true victims of domestic violence deserve every legal protection under the sun. However, Florida law extends these protections to accusers, even when there is no physical evidence to support their claim. In fact, Florida police can arrest someone for domestic assault or battery based solely on an accuser’s or witness’s statement. That means that if your partner—or even a neighbor who overhears an argument—calls the police and claims there was an assault, you could be arrested and taken to jail. If this happens, you need a lawyer right away, even if you think there is no way the charges could stick. Along with hitting, punching, kicking, and other physical attacks, the following actions could be considered domestic assault in Florida:

As difficult as it should be to prove that these kinds of actions rise to the level of domestic assault, police and prosecutors will often give the accuser the benefit of the doubt in pursuing charges. Even if the accuser later decides to drop the charges, you can still be charged and prosecuted in Florida. For these reasons, you need legal representation as soon as you are arrested and charged with domestic violence.

What an Attorney Will Do for You

With years of experience defending clients charged with domestic assault and battery, Attorney Daniel Izquierdo will fight to protect your rights when your domestic partner accuses you of violence. He will listen to your side of the story, fully investigate your case, and explore all possible defenses. To prove your innocence, he will locate witnesses, look for physical evidence—or point out the lack of physical evidence—and determine the accuser’s motives. He will do whatever it takes to make sure that a “he said, she said” doesn’t ruin the rest of your life.

Penalties for Domestic Assault and Battery in Florida

Why should you take an accusation of domestic violence seriously? Because you are facing serious consequences. Domestic assault charges can be prosecuted as misdemeanors or as felonies, depending on the extent of injuries and the strength of the physical evidence. If you are convicted of a misdemeanor, you could face:

It’s Always Worth Fighting Back

Relationships are complicated—we get that. Partners who feel ignored or betrayed may become vindictive. Passionate relationships with a lot of conflict could suddenly become too much for one of the partners. Actions that were not meant to cause harm could be misunderstood. Whatever the reason for the accusation of domestic violence against you, you must protect yourself and your future by hiring an experienced domestic assault and battery defense attorney as soon as possible after your arrest. If you would like more information, please download a FREE copy of our special report, He Said, She Said: Three Mistakes That Can Destroy Your Domestic Violence Case in Florida.