Arrested for Illegal Reentry or Citizenship Fraud? Our Federal Defense Attorney Can Help! 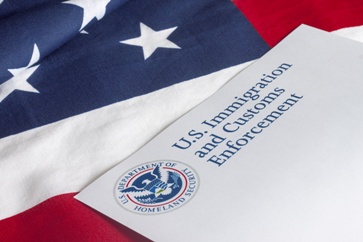 Attorney Danny Izquierdo is not an immigration lawyer. If you are looking for legal assistance with obtaining citizenship, you will need a law firm that takes those kinds of cases. However, Danny is a criminal defense attorney who proudly represents clients who have been arrested by Immigration and Customs Enforcement (ICE) and charged with a criminal offense. If convicted of one of these crimes, you face fines, prison time, deportation, and a permanent ban from entering the U.S. Don’t leave your future to chance. Contact our federal defense team if you or a loved one has been arrested by ICE and charged with one of these crimes.

Arrests for illegal reentry have increased steadily under Donald Trump’s presidency, and ICE aggressively pursues people suspected of it. Being convicted of illegal reentry will get you deported and could land you in prison for a minimum of two years and a maximum of 20 years. You could be charged with this crime if you:

Knowingly committing fraud to get citizenship documents is one of the most serious immigration violations on the books. In fact, the Trump administration created a task force in 2018, whose sole purpose is to investigate citizenship fraud. Citizenship fraud may be committed by using a false name, false alien registration number, or failing to disclose a prior criminal conviction, misrepresentation, or order of removal when applying for citizenship. If convicted of citizenship fraud, you face imprisonment of up to 25 years, probation, fines, and immigration consequences, including a permanent ban on re-entering the U.S. with no exceptions or waivers.

The key for prosecutors to get any fraud charge to stick is proving that you knowingly provided false information with the intent to defraud. One possible defense to a citizenship fraud charge is proving that you believed the information you gave was true. A defense to the related charge of making false claims to citizenship for the purpose of voting, working, or applying for a U.S. passport, is showing that you believed yourself to be a citizen. Our defense team will work hard to build the best possible defense on your behalf.

Beginning in the 1980s, marriages between U.S. citizens and foreign nationals have been heavily scrutinized by the U.S. government. If there is even the least suspicion that the purpose of the marriage is to evade U.S. immigration laws, U.S. Citizenship and Immigration Services (USCIS) will demand proof that the marriage is authentic. In an attempt to prove that a marriage is a sham, agents will:

A foreign national charged with marriage fraud faces deportation, while both the immigrant and the U.S. citizen face up to five years in prison and a fine of up to $250,000. If you are being investigated for marriage fraud—or have been called in for a second “Stokes” interview, you should call our office in Miami before answering any questions from USCIS.

Even if you know you have broken the law in trying to enter the U.S. or obtain citizenship, a federal defense attorney can help you avoid the most serious penalties. In some cases, returning to your home country is preferable to serving a prison sentence in the U.S. In other cases, the opposite is true. Without an experienced criminal defense attorney by your side, however, you will have no say in the matter. If you are, in fact, not guilty, your attorney will fight to get the charges dropped.