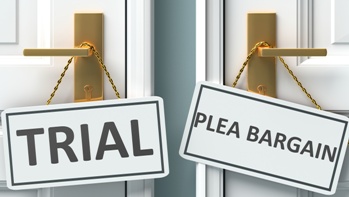 The arresting agent or federal prosecutor may make it sound like an easy decision. Accept their deal and avoid a trial and the most severe consequences. However, you have a right to an attorney, and this is a time to exercise that right. Even if you are threatened with losing the plea deal, you should consult a federal defense attorney before accepting any offers made by federal prosecutors.

What Is a Plea Bargain?

First, the basics. A plea bargain is an agreement between the prosecutor and defendant in which the defendant agrees to plead guilty to a particular charge in return for some concession from the prosecutor. The concession may be a less serious charge or guarantee of a particular fine or sentence. In making the deal, the defendant waives his right to a trial, but a judge will review the agreement. With a plea bargain, the case can be resolved quickly.

Plea Deals Are Not for the Benefit of the Defendant

Despite what they may tell you, prosecutors are not offering you a deal to make your life easier. They are doing it to make their lives easier. Some reasons a federal prosecutor may offer a plea deal include:

If the prosecutor can get you to plead guilty without a trial, she is relieved of the burden of having to provide evidence to convince a jury. If she doesn’t have evidence to begin with, a plea bargain could be a smart strategy to get a conviction.

Save Time and Money

Prosecuting a federal charge is a long, expensive process. By getting you to accept a plea deal, the prosecutor’s office will be saving valuable time and money.

In some cases, the bargain being offered is a good deal for the defendant, and he should take it. However, there are other times when it is not in the defendant’s best interest. How do you know the difference? Ask your attorney!